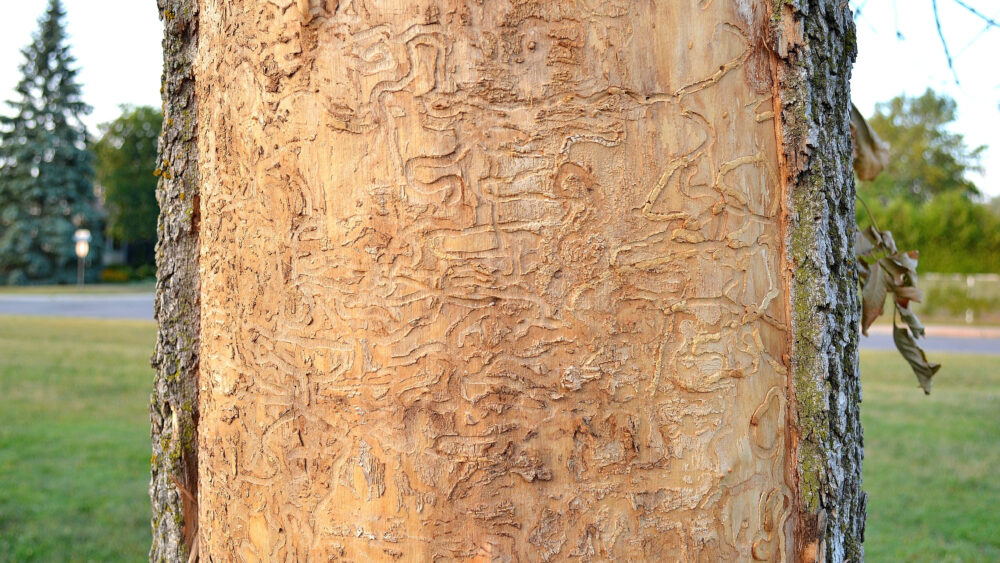 What Are the Different Types of Tree Borer Insects?

Emerald Ash Borers are the most widely-known (and feared!) tree borer insects, but by no means are they the only insects that can compromise the health of your trees. As Certified Arborists, there are a number of tree borer insects we treat at Rick’s Plant Health Care. Below, we discuss some of the most common tree borer insects in the United States.

Flat-headed Borers are beetles with a metallic-like shine and bold colors like green, blue, copper, and bronze. Don’t let their pretty appearance fool you, though—some of the most destructive tree borers are among this species. They tunnel under bark and into the vascular tissue of plants, killing trees from the inside. Flat-headed Borers include:

Flatheaded Apple Tree Borer (Chrysobothris Femorata) – Although these borers can attack any hardwood tree that is compromised by stress or injury, they are most attracted to Crab Apples, Maples, and Hawthorns.

Bronze Birch Borer (Agrilus Anxius) – If you have White or Paper Birch trees in your yard, keep an eye out for signs of Birch Borer infestation, like D-shaped holes in the trunks and limbs. Damage from these tree-borer insects can eventually cause birch trees to die.

These borers look almost like wasps as adults, but as with most borers, it’s the larvae that damage trees. Clearwing Borers include:

Greater Peach Tree and Lesser Peach Tree Borers (Synanthedon Exitiosa) – As you might guess from their name, these borer insects attack peach trees, as well as other stone fruits, including cherries, plums, nectarines, and apricots. They destroy trees’ vascular tissue through borer and girdling.

Dogwood Borer (Synanthedon Scitula) – Dogwood Borers feed on Flowering Dogwood, but infestations only occur in trees that are already injured or compromised.

Lilac Borer (Podosesia Syringae) – Lilac trees add beauty and fragrance to your yard, but they can also attract Lilac Borers. The larvae also feed on Ash and Privet.

Ambrosia Beetles – Ambrosia beetles is a term used to describe several species of small beetles that breed and farm ambrosia fungus in the sapwood of stressed trees. The damage they cause is usually lethal. With more trees stressed due to harsh environmental conditions and climate, we’re seeing an increasing number of trees dying due to ambrosia beetle damage lately.

Also known as Long-Horned Beetles, Round-Headed Borer Larvae create tunnels beneath the bark, exiting their hosts when they reach adulthood to carry out the rest of their life cycle. These insects include:

Locust Borer (Megacyllene Robiniae) – These larvae bore into the inner bark of trees, where they live over-winter.

Cottonwood Borer (Plectrodera Scalator) – As you might guess from the name, this beetle attacks Cottonwood trees, although it also feeds on Poplar and Willow. Larvae tunnel inside these trees for 2 years before reaching adulthood.

Twig Girdler (Oncideres species) – Twig Girdlers can cause damage to Pecan, Chinaberry, Mimosa, and Sweet Acacia trees. Adults girdle tree limbs, laying their eggs in the grooves they create, which leaves the limbs vulnerable to high winds and storms.

Schedule a Consultation With Our Certified Arborist

Contact Rick’s Plant Health Care today to schedule a tree inspection to look for signs of tree borer insects on your property.